Hank Williams Jr. Hank Jr. is a huge history buff and especially enjoys memorabilia, artifacts, and relics from the Civil War. Because of this, and his incredible career, he’s been able to amass a giant collection of cannons, artillery, weapons, and other items that were used during that time period.

Hank used to hunt for Civil War relics with his close friend, Johnny Cash -- the greatest country singer of all time. (June Carter Cash was Hank Jr.'s godmother.) In a four-minute clip, Williams, now 71, mentioned two of his ancestors in the 6th Alabama -- one was killed at Gettysburg, another lost an arm at Little Rou

Long before he became a mega-country music star, with hits such as "A Country Boy Can Survive," "All My Rowdy Friends," and "Family Tradition," Hank Williams Jr. pursued another passion: Civil War relic hunting. 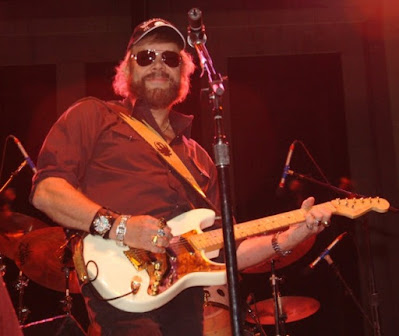 Hank Williams Jr. at a 2006 concert. (Andrea Klein via
Wikimedia Commons)On Dec. 6, 1964, the Tennessean ran a short feature by Hugh Walker on Civil War “treasure hunters” in the Music City. Among those featured in the story was Williams Jr., then 15. One of the three photos that accompanied the story showed him holding an unexploded, fused shell (yikes!) found by Jordanaires tenor singer Gordon Stoker in the back yard of his home near Shy’s Hill, where John Bell Hood's Army of Tennessee was routed on Dec. 16, 1864. Hank Jr. attended John Overton High School, built on Peach Orchard Hill, defended by Hood's army.

Williams Jr.'s passion for relic collecting -- and the Civil War -- has lasted well into adulthood.

"We have so much information now on the Internet that you can almost trace a musket or revolver right to the soldier that it was issued to," he said in a video posted to YouTube in 2008. "Boy, that makes it sweet when you can put it all together." Williams used to hunt for Civil War relics with his close friend, Johnny Cash -- the greatest country singer of all time. (June Carter Cash was Hank Jr.'s godmother.)

In a four-minute clip, Williams, now 71, mentioned two of his ancestors in the 6th Alabama -- one was killed at Gettysburg, another lost an arm at Little Round Top. He also showed off a musket in his collection with "Co. G, 6th Alabama" carved into the stock.

In 1992, when Hank Jr. scrapped his full beard for a goatee look, his agent even gave it a Civil War spin. "He was looking through some Civil War books and saw some generals," Merle Kilgore said, "and decided that's how he wanted to look."

From Shy’s Hill to Peach Orchard, collectors of Civil War relics are still looking for minie balls, cannon halls, bayonets, buttons and belt buckles. And they're finding them! One of the more successful and more knowledgeable of the relic hunters is Hank Williams Jr., son of the late great country singer, and a recording star in his own right.

Hank, 15, lives at 4916 Franklin Road, but has done most of his collecting of shells and bullets at High Note, the home of Gordon Stoker of the Jordonaires Quartet. Stoker lives on the high hill about 400 yards south of Shy's Hill, on Benton Smith Road. The brow of this hill was the scene of a sharp battle on the second day of the Battle of Nashville on Dec. 16, 1864.

Hank operates with the aid of an electronic metal detector, and while we were there he came up with a perfect minie ball, found two inches under the grass in Stoker's back yard. "This it a .577 caliber Confederate mini ball," Hank said, "fired from an English Enfield rifle."

It developed that he usually is able to identify shells and bullets, and tell from what arm and by which army they were fired. Stoker, too, has a considerable treasure from his back yard, and one of these is a heart stopper. It is a round, explosive type shell containing a five-second fuse. The fuse stopped at three and a half seconds, for some reason, and the shell never exploded. Now, after a century, the shell looks as though It might explode at any time if that last second and a half ever ticks off. 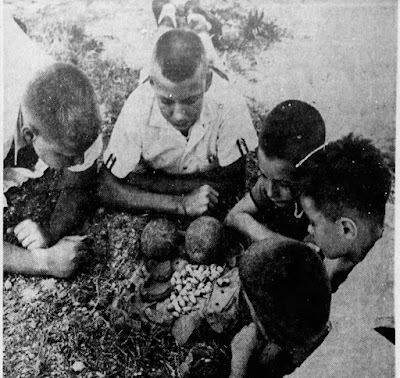 Jimmy McMinn shows 52 minie balls and two cannon balls
to his friends. He found them at Nashville's Peach Orchard Hill,
where he lived. The photo accompanied the
1964 story that featured Hank Williams Jr.On Shy's Hill itself Vernon W. Gerth and his boys, David and John, have been busy collecting minie balls. Not long ago they found a fine bayonet and a partly exploded shell located with shrapnel. Williams also had found a shell of this type.

The stone wall that runs along Stonewall Drive continued the Confederate line eastward most of the way to Franklin Road, and around the brow of Peach Orchard Hill. On the northern face of this hill young Jim McMinn, a student at Overton High School, has picked up 52 minie balls and two cannon balls, plus some miscellaneous scrap iron.

Jimmy's family has been forced to move from the hill top. temporarily, because of the new highways that will cross Peach Orchard. One of these, the southbound 1-65, will pass just east of the hill, which is really a long ridge, somewhat broken in the middle. The other, which may be a part of the projected Briley Parkway, will he an extension of Battery Lane running east and west. It passes a little south of the Confederate defense line and cuts across the line where it was refused to the south.

Besides the collections of shells and bullets mentioned, many Nashvillians have Civil War guns, uniforms, swords and articles of various types and scores of these will be furbished up and put on display for the commemoration of the battle centennial, Dec. 11-13.

POSTSCRIPT: Soon after the 1964 Tennessean story was posted to the Battle of Nashville Trust Facebook page, one of Stoker's sons weighed in. "The group of youngsters in the first picture (see below) is myself, my brother Brent Stoker, and our neighbor, Johnny Daniel," Alan Stoker wrote. "Thanks for posting this. We still have most of these relics too."

In this photo published in the Tennessean in 1964, Gordon Stoker (left), a singer with the
Jordanaires, holds a spoon he found on a battle line while Hank Williams Jr. examines
an unexploded artillery shell Stoker found in his back yard near Shy's Hill in Nashvill

Hank Williams Jr. and Gordon Stoker, a singer in the Jordanaires, "prospect for
mini balls," according to the caption in the Tennessean on Dec. 6, 1964.